skip to main | skip to sidebar

The ever coveted Etsy Treasury is as elusive as the endangered Alabama Cave Shrimp!  As a still considered "newby" to Etsy and the daunting task of acquiring a treasury, I learned a few tricks today thanks to a fellow team member on the  Etsy's Recyclers Guild Team.

They may be secrets, but I'm no good at keeping secrets, well unless it's something personal a friend tells me, then that's different.

Did you know there's an Etsy Treasury CLOCK!?
It's really cool, I don't do military time,  but the visual is a quick indicator of when there will be an open treasury. Saves from going back and refreshing a gazillion times.

Another secret! Did you know there are two treasury locations? The main treasury must be below 333 for a new spot to open up, the other "secret" treasury called Treasury West has a fill of 222 lists. Treasury West's url can be gotten to via the Treasury Clock.

Yea this makes more competition for me to get another treasury, but heck it's all fun!

I created my first treasury earlier this week and was thrilled! I wanted to add my one "allowed" item which is a favorite of mine and new to my shop, Tweet Tweet Blue Bird, so my treasury list was of all handmade blue birds. I found SO many adorable, beautiful and cute items. My treasury had a good amount of comments and views, small compared to others, but I was pleased. One of the featured sellers even had a sale! Sadly it wasn't me :0( but I'm holding out hope for the next one :0)

After an hour and a half of going through team member's shops and selecting items I like, I now have a list of items prepared for my next (2nd) treasury.

One of the most beautiful items in my list is this gorgeous bracelet by mwgregory
Posted by Cher's Passion at 2:40 PM

Creating art and handmade crafts from my own imagination is something I started doing as a child. I love taking an ordinary object and transforming it into something surprising and unique.

I think everyone should recycle, repurpose and reuse! I'll blog about my ideas, creative inspirations, feature fellow green Artists and Crafters, and an occasional tutorial. 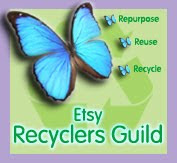 I love Everything Etsy!